The Civic Society was asked to Chair this Partnership – and we have continued to lobby for improvements since then via this town-wide forum.

Constructed about 1826, this is one of the celebrated works of Thomas Telford and provides an iconic ‘gateway’ to the west of the town.

The condition of the aqueduct had been deteriorating over many years. After much lobbying by the Civic Society; Nantwich Partnership and other bodies, the Canals and Rivers Trust agreed to undertake the restoration of the structure, which was completed in November 2015.

Subsequently, the Society, together with the Rotary Club, organised the painting of the railings next to the steps up to the aqueduct.

We have a long term project for making this area a better place to learn about the origins of Nantwich as a Salt producing town from before Roman times.  The Old Biot (‘biot’ meaning a salt spring) still pumps brine to the open air swimming pool nearby.

When the Waterlode relief road was constructed around the north western part of the town centre in 2002, the Civic Society was actively involved in the campaign to retain the status of Welsh Row as an important thoroughfare into the town (as it has been for many centuries). The Society continues to lobby for better traffic circulation and parking around the town. 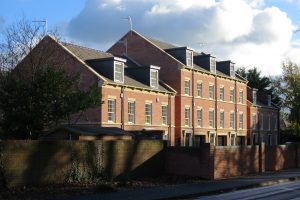 Nantwich is scheduled for major housing growth over the next decade.  The Civic Society will continue to campaign to improve and enhance the environment of the town for its residents, and for all who come to work or visit.  We will also continue to undertake practical work to help achieve this.

One example is the new housing on Waterlode which was redesigned in consultation with the Society to reflect more of the area’s Georgian character.

The historic character of Nantwich is easy to spot in the town centre with many Elizabethan timber framed, Georgian and Victorian buildings. One distinctive local landmark is the early 20th Century listed building on the corner of Pillory Street and Hospital Street.  The gallery below shows examples of some of our favourites.